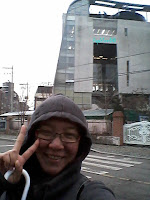 What a trip to Seoul,South Korea without ever going to see
THE YG Entertainment HQ building for the YG stans?
Be it VIP,LUCKY 7 or BLACKJACK (just naming some),
even seeing the building itself brings joy & excitement to us,right?
Let alone being lucky enough to see the stars up close :D

Going to YG building almost becoming my daily routine,tehee.
*no, i'm not a sasaeng fans*
It's hard not to when you know where it is.
Because,it's like,
"this is my only chance to see and experience the awesomeness first hand".
Actually I had tried walking from Hongdae to Hapjeong too.
It's not too far though, yes, I did reached YG Building,
but it's time & energy consuming. ^^
Best to go by subway or bus, or better taxi.
Haven't tried going by bus or taxi,just subway.
So,here it is.

Take subway Line 2 (Green). Off at Hapjeong Station, exit 8.
It's about 5-10minutes from the station,depends on your pace.
Hehe,like mine,I bet yours will be as light too :D

Off the exit 8,just go straight.
You'll see a gas station right outside,keep walking.
Keep walking until you see Hotel Circle on your right side.
Then keep walking, you'll see another gas station, however,keep walking!
Walk along the road until you see a junction, cross it,
you'll see a 'Coffee & Beer' cafe,
here you'll see a huge statue overlooking to the Hangang Park to your left.
Ignore it though.
Just follow the path. It'll lead you to another junction,
this time turn to your right.
Walk along the path.
Keep your eyes open wide.
Look carefully,
the YG Building is already visible from that point!
Cross the road,walk pass the 'Prouod' apartment,
the YG Ent building is right there!
There's also a G25 minimart right next to YG Building.
Notice it's among the alley so don't get lost in the alleys yah ;)
Pray for all the luck to be on your side upon going there.
The first time I went there, I stumbled into Mr Sean Ro of JinuSean inside the G25.
I was like, 'erm, I kinda recognise this man'
before immediately recall that he's Sean! >_<
Yes, the artists,staff, trainees,dancers,coodi noonas,etc
do goes and buys stuff from the G25 minimart
as well as eat out at nearby restaurant, especially the dancers.
Later on, we saw Hwangssabu-nim and few other staff/managers/dancers.
I saw Seo Ki Chul, one of the dancer,he's a hottie! >_>
After that, I kept stumble into Mr Sean & Ssabu-nim.
Even at the concert hall, while we're hanging around the stadium
before the concert started,Ssabu-nim greeted us.
We also saw many young trainees, B I being one of them.
He kinda look like Tablo a bit,yeah,that kinda face.

I also saw Dae's blonde hair on the day before they departed to NYC.
BIGBANG's recording a SBS program 'Healing Camp' that day.
Hehe,maybe that's the reason they revealed it the next day at the airport.
Because it's around their promotional time,
it's very much possible to see BIGBANG's boys going into & out of the building.

No worry, you could wait outside all day long if you want to,
just don't go inside their compound.
However there aren't too many fanboys that dare to go near the HQ.
Usually they just came,look from afar & took picture then left.
One day we met with a fanboy, from the accent,I bet he's from US.
When asked who's he's waiting to see,
he said he just wanna see the building.
He then sat at a corner, with a happy face, smiling & adoring the building. haha. *precious*
He's too shy to admit he's waiting for his fav..i don't know...
could be BIGBANG/2NE1/SE7EN/GUMMY/TABLO/PSY/etc

During my other tripS I saw 2NE1's member as well.
Minji, Bommie,went for their daily workout.
Bommie is too adorable! One night,she even stop her van to greet the waiting fans.
Minji is relatively small to how I imagine her to be.
She's petite and Bommie indeed a goddess-like.

On another lucky day, while walking my way towards the building,
I saw a white van going towards the building.
We ran all our might and managed to catch up with se7en's arrival!
He's such a sweetheart!
He came out of the vans,waved & posed for us.Teheee!
Later on Tablo arrived.
He's so polite, he greeted us & bowed to the fans before entering the building.

I also saw se7en arriving to the building with his Maserati one day.

During my final trip to YG Ent HQ before leaving for good, Ssabu-nim saw me & my sister and greeted us, he might recognised us after all, we're always went to the building, >_< also maybe because he saw us up close other night before, he was behind us in the concert hall, D-3. He left to another section after the picture of yellow-crownstick sea that he tweeted.

Popular posts from this blog

fiqahlee88
Malaysia
This blog is just a space for me just being me. It's also a place where I'm doing part time business to fund my study~Got myself a Master Degree in Accounting- going for pHd in Financial Crime now :) Welcome to my blog, have a nice day! 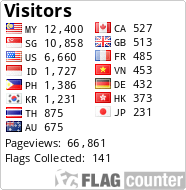